Welcome home! This is for you!

PRAYER FOR OUR STUDENTS

Lord our God,
in your wisdom and love
you surround us with the mysteries of the universe.

Send your Spirit upon our students
and fill them with your wisdom and blessings.
Grant that they may
devote themselves to their studies
and draw ever closer to you,
the source of all knowledge.

We ask this through Christ our Lord.
R/. Amen.

~from Catholic Household Blessings and Prayers, US Bishops Conference

VOLUNTEER OPPORTUNITIES
Contact Edgar or Fr. Byron
MISSION EXPERIENCES
Email Fr. Byron: frbyron@csufnewman.com
SACRAMENTS PREPARATION; RCIA AND CONFESSION ANY TIME
If you haven't received all your sacraments (i.e. Confirmation; First Communion) or if you are not Catholic and would like to join the Catholic Church; or, if your would like to do Confession, contact Fr. Byron at any time!  We are here for you! 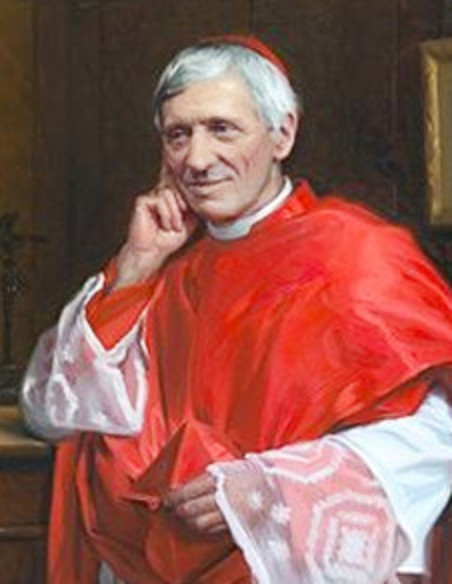 John Henry Newman (21 February 1801 – 11 August 1890) was an English theologian and poet who was an important and controversial figure in the religious history of England in the 19th century. He was known nationally by the mid-1830s and was canonized as a saint in the Catholic Church in 2019 by Pope Francis.

He became one of the more notable leaders of the Oxford Movement, an influential and controversial grouping of Anglicans who wished to return to the Church of England many Catholic beliefs and liturgical rituals from before the English Reformation. In this, the movement had some success.  Newman  wrote, "I was on my death-bed, as regards my membership with the Anglican Church". In 1845 Newman officially left the Church of England and his teaching post at Oxford University and was received into the Catholic Church. He was quickly ordained as a priest and continued as an influential religious leader, based in Birmingham. In 1879, he was created a cardinal by Pope Leo XIII in recognition of his services to the cause of the Catholic Church in England. He was instrumental in the founding of the Catholic University of Ireland (CUI) in 1854. Newman was also a literary figure.

He is the fifth saint of the City of London, behind Thomas Becket, Thomas More, Edmund Campion and Polydore Plasden.

He is the Patron Saint of University Students and Scholars.

Do you see the Newman connecction now? :)

Pope John XXIII  was head of the Catholic Church and sovereign of the Vatican City State from 28 October 1958 to his death in 1963. He was one of thirteen children born to a family  in Lombardy.

He was unexpectedly elected pope on 28 October 1958 at age 76 after 11 ballots. Pope John XXIII surprised those who expected him to be a caretaker pope by calling the historic Second Vatican Council (1962–1965), the first session opening on 11 October 1962.

John XXIII made many passionate speeches during his pontificate. His views on equality were summed up in his statement, "We were all made in God's image, and thus, we are all Godly alike."

He made a major impact on the Catholic Church, opening it up to dramatic unexpected changes promulgated at the Vatican Council and by his own dealings with other churches and nations. In Italian politics, he prohibited bishops from interfering with local elections. In international affairs, his "Ostpolitik" engaged in dialogue with the Communist countries of Eastern Europe. He especially reached out to the Eastern Orthodox churches.

His overall goal was to modernize the Church by emphasizing its pastoral role.

He did not live to see the Vatican Council to completion. His cause for canonization was opened on 18 November 1965 by his successor, Pope Paul VI, who declared him a Servant of God. On 5 July 2013, Pope Francis declared John XXIII a saint, based on his virtuous, model lifestyle, and because of the good which had come from his having opened the Second Vatican Council. He was canonized on 27 April 2014.

John XXIII today is affectionately known as the "Good Pope" and in Italian, "il Papa buono". His feast is on October 11.

Our Life in Pictures